Home › Blog › A very profitable Christmas: How do game companies turn your holiday excitement into money? 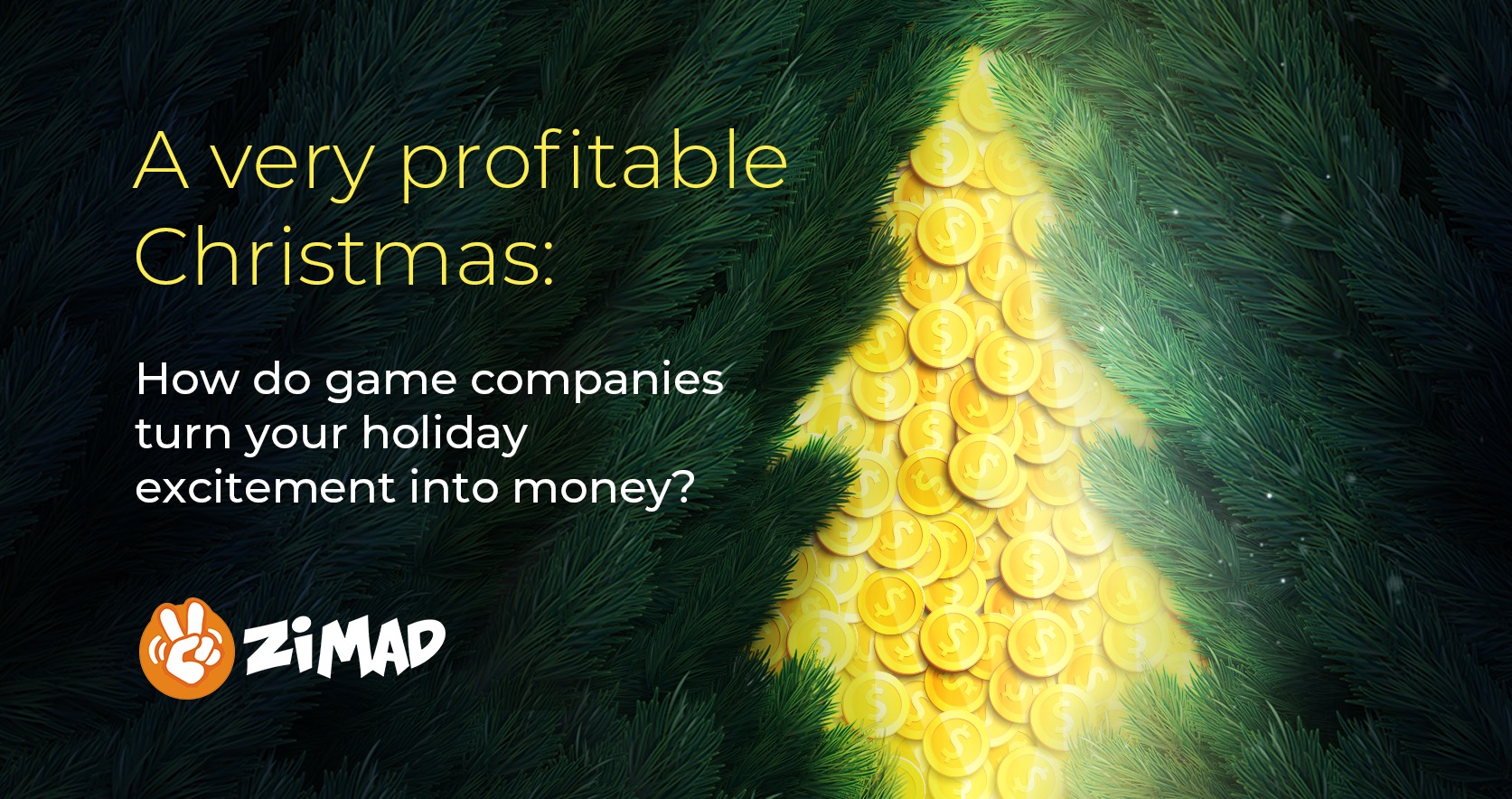 A very profitable Christmas: How do game companies turn your holiday excitement into money?

Companies turn festive mood into collecting donations every year – but everyone does it in their own way. ZiMAD has analyzed several popular mobile games and their ways to monetize the New Year’s mood.

Christmas and New Year’s Eve is a heavenly time for marketers who want to get into the pockets of consumers. For gaming companies it’s not only a way to earn extra money, but also to increase DAU, ER, and in general – it’s a long-term result work. ZiMAD selected several top games of different genres  and found out what kind of events they add to their products during the holidays. 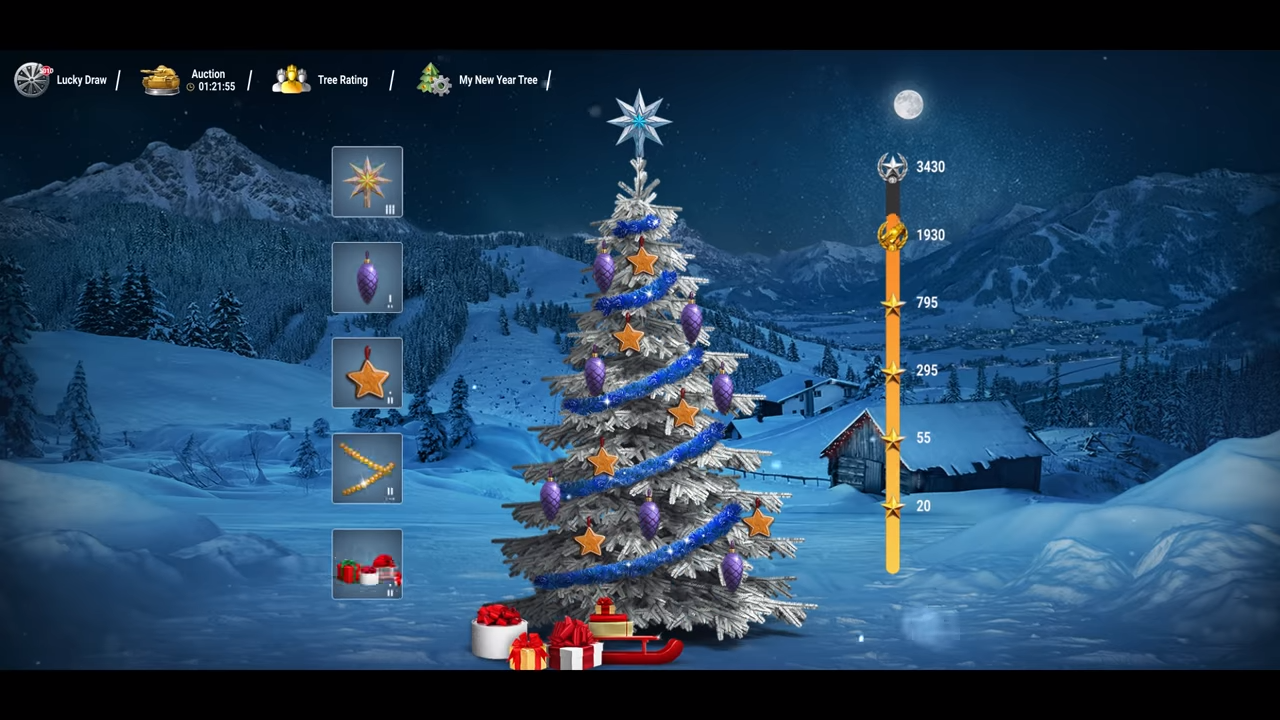 Since 2019 New Year’s Eve update has not yet been released, we analyzed last year’s update.

The gameplay of the holiday update was designed in the following way: a new currency that the player received for participating in the event was added to the game. It was used to reach the mylestones to get special prizes. Also the user could exchange currency for candy to decorate the tree, and for the most active users were provided special prizes – tanks.

Monetization in the New Year’s Blitz update  was built around the player’s purchase of chests, skins for equipment, aprons, upgrades for the hangar – in short, all the same as before the addition of holiday event. Updates were promoted through social media announcements, the publisher’s website, the game site, and the YouTube channel. 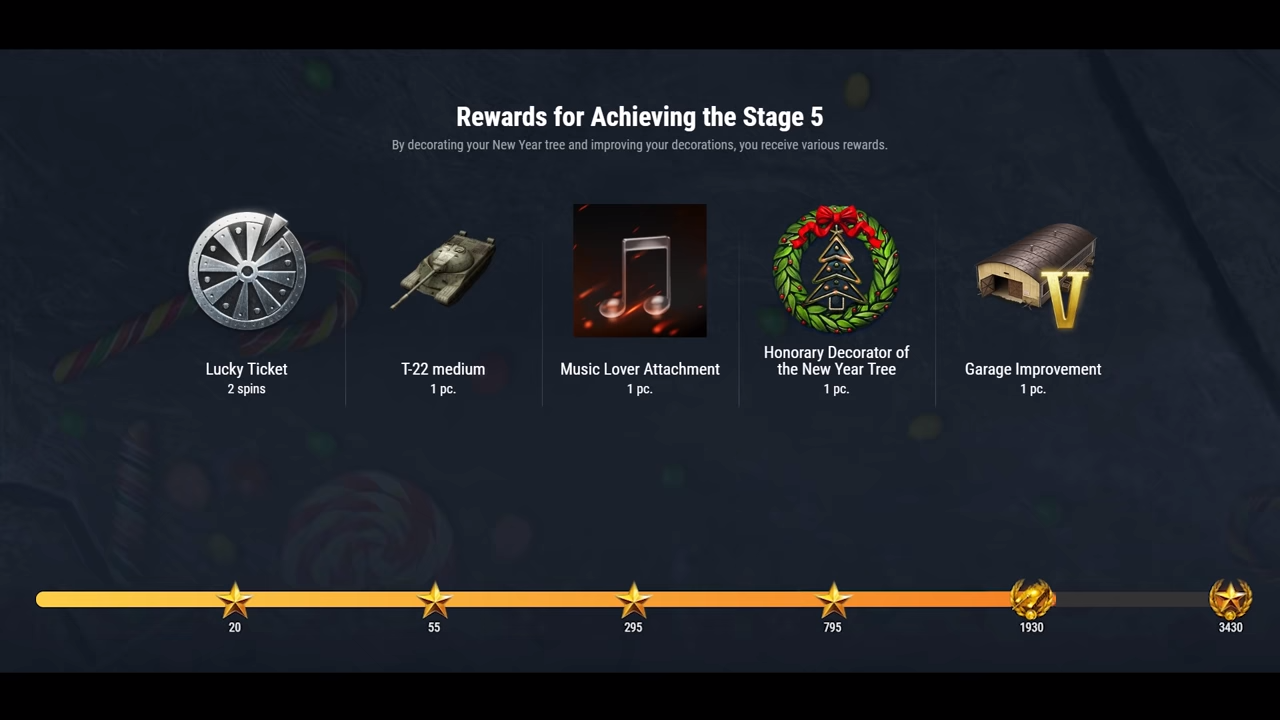 Features of monetization of WoT are built on a fairly narrow loyal target audience with a large number of users from the CIS. Since the audience is adult (28 + years) and solvent, it is much easier to work with it without having to force regular payments. I believe that most of the income comes from the premium account and the purchase of premium tanks.

In my subjective opinion, the majority of players play quite badly. And those users who play well, and there are significantly less of those, depend on the competent use of other team players to achieve personal goals. Therefore, it is not reasonable to tie the game events to the user’s skills, as it will not lead to an increase in income, but it can significantly reduce the involvement. I believe that this is why Wargaming has chosen a scheme with customization and rewards for activity.

Such rewards usually stimulate user engagement and the need to make basic payments to achieve the goals for the specified period of time (i.e increase of conversion). Customization, on the other hand, is a consolation prize for those who are unable to complete key tasks in time by increasing the duration or frequency of sessions, or through conversion. 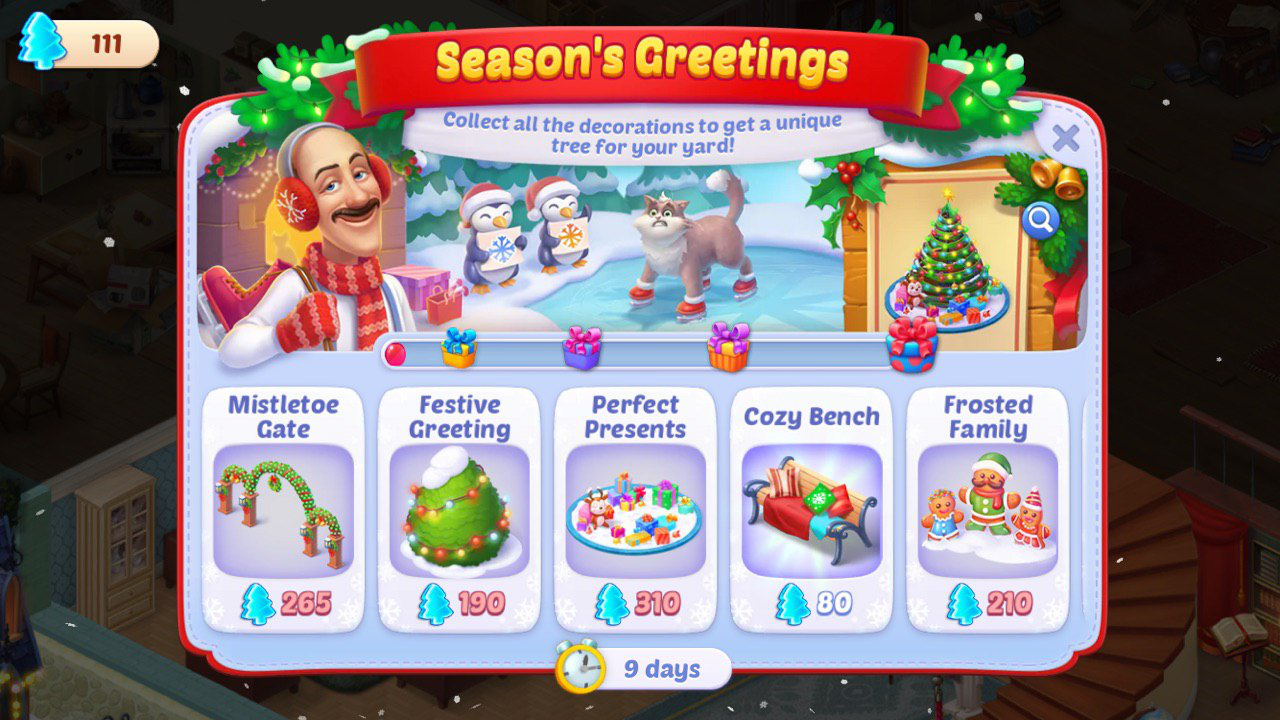 The game of the Bukhmanov brothers in the match-3 genre combined a puzzle element and furnishing of the home of your dreams – and in total brought the developer company Playrix already more than 1 billion dollars.

Playrix uses similar mechanics for many Homescapes events: the game adds a task to decorate the house with special pieces of decorations, which can be bought only for a new currency (in the New Year’s Eve update it is Christmas trees), which can be found only in match-3 levels – and only a limited number of days. You can not buy this currency for a donation.

The number of Christmas trees that you get, however, is not fixed: on each level they are attached to certain chips and are randomly generated. To get them, you must collect the marked chips by creating three in a row. This encourages the user to spend more time completing one level.

Monetization in this case is indirect: users are not encouraged to buy Christmas decorations for the house for real money. The main conversion is aimed at buying special boosters and new lives for completing match-3 levels. Homescapes New Year’s event is promoted through social networks. 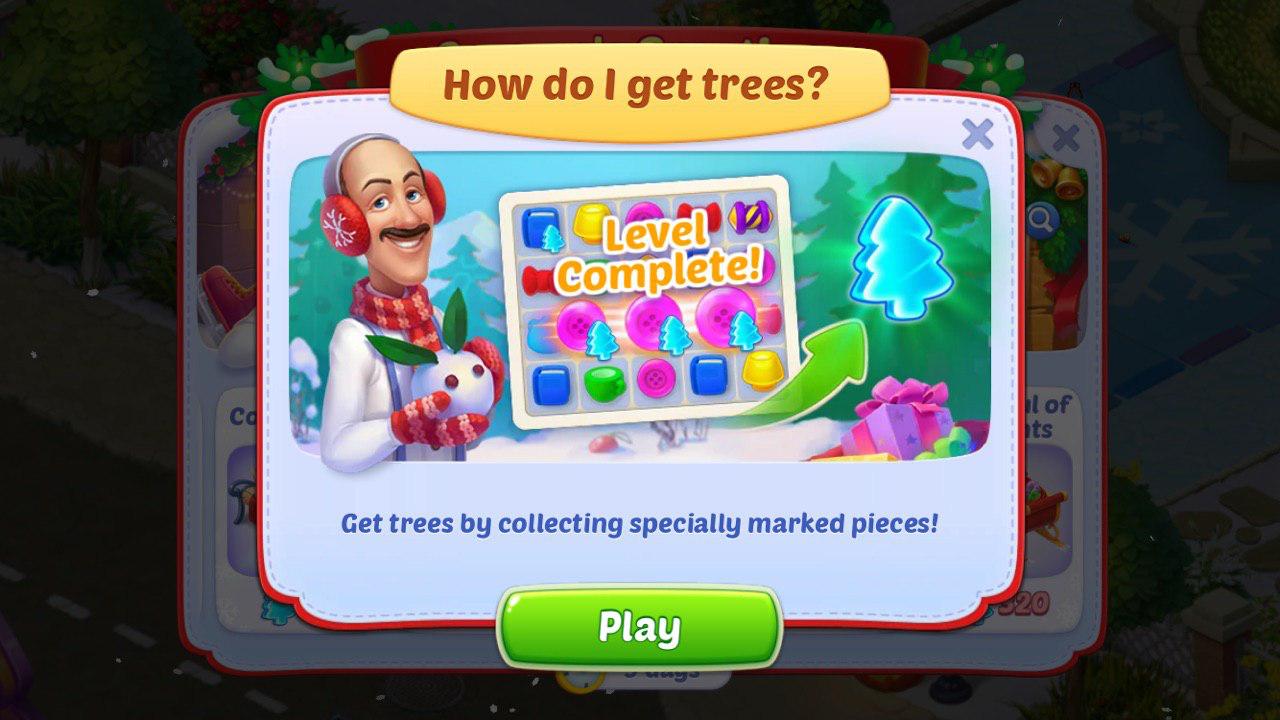 How to get trees in Homescapes

Another event based on the basic principles of monetization. The most important part of this event is the time limit combined with a well calculated balance. Developers rely on the fact that users will have to go through a certain number of levels in the given period of time to receive the proposed rewards. Usually, in order to close the event completely within the time limit, players are asked to pass more levels than they pass without additional stimuli. To achieve this goal, the player is still given a choice between increasing the frequency and duration of the sessions, and converting to a purchase that will allow them to effectively complete the task.

In case of Playrix, I can confidently say that this scheme is quite effective and does not require any significant complications, as the company works with a very loyal audience within a very high quality product. Therefore, there is no direct need to introduce aggressive monetization mechanics into events. The main goal is to get users as much involved in the product as possible without any fear of content being fully absorbed by them (I do not know the latest information, but I believe that the number of levels has exceeded 3000).

With the combination of high quality product and loyalty to Playrix, monetization is easily supported by the simplest mechanisms of user involvement in later stages of the game. Despite the fact that the basic gameplay may seem monotonous after the passage of several hundred levels, all this is compensated by the diversity of the submitted visuals, coupled with a variety of game mechanics of Match-3.

Playrix is definitely one of the leaders of the mobile gaming industry. They have a huge Homescapes audience, for the retention of which they come up with new different events. Most of them are classically limited in time and aimed at completing as many levels as possible. In the Christmas event they used the same scheme – the player needs to collect Christmas trees to progress, and to earn them he needs to complete a level. Often the level cannot be passed with just skills and luck, but the player needs to use boosters or buy new moves. Thus the event itself is aimed at strengthening the involvement of the players, which adds profit to the existing monetization system. 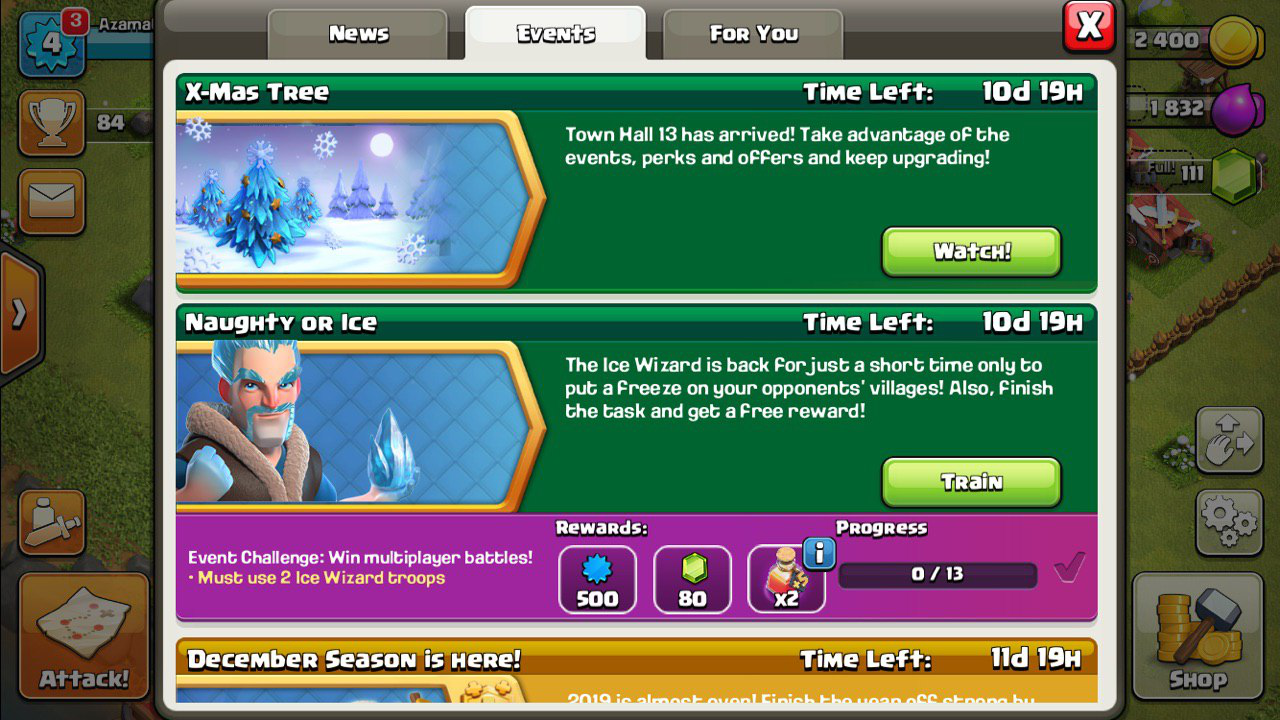 The Finnish strategy has already brought the Supercell developer company more than $71 million – and this is as of May 2019. The main criteria that determined the revenue spike for 2019 was the introduction of Gold Pass, through which the player improves the quality of prizes received for the performance of daily and weekly tasks.

Supercell releases a Christmas update for Clash of Clans every year – but they do it in their own style. In the update the player gets a new version of the City Hall (for Christmas 2019 it’s the thirteenth version), with which you can upgrade all created buildings to a new level. Also the player is given a Christmas tree with a unique design, which some collectors leave on the territory of the camp. In addition, the game introduces new ice characters with special battle mechanics – they are available only for a limited period of time.

Monetization at Clash of Clans looks like this: the player buys crystals, gold and elixirs to quickly upgrade the buildings and restore the characters after the battle. No special currency is introduced for Christmas and New Year holidays. 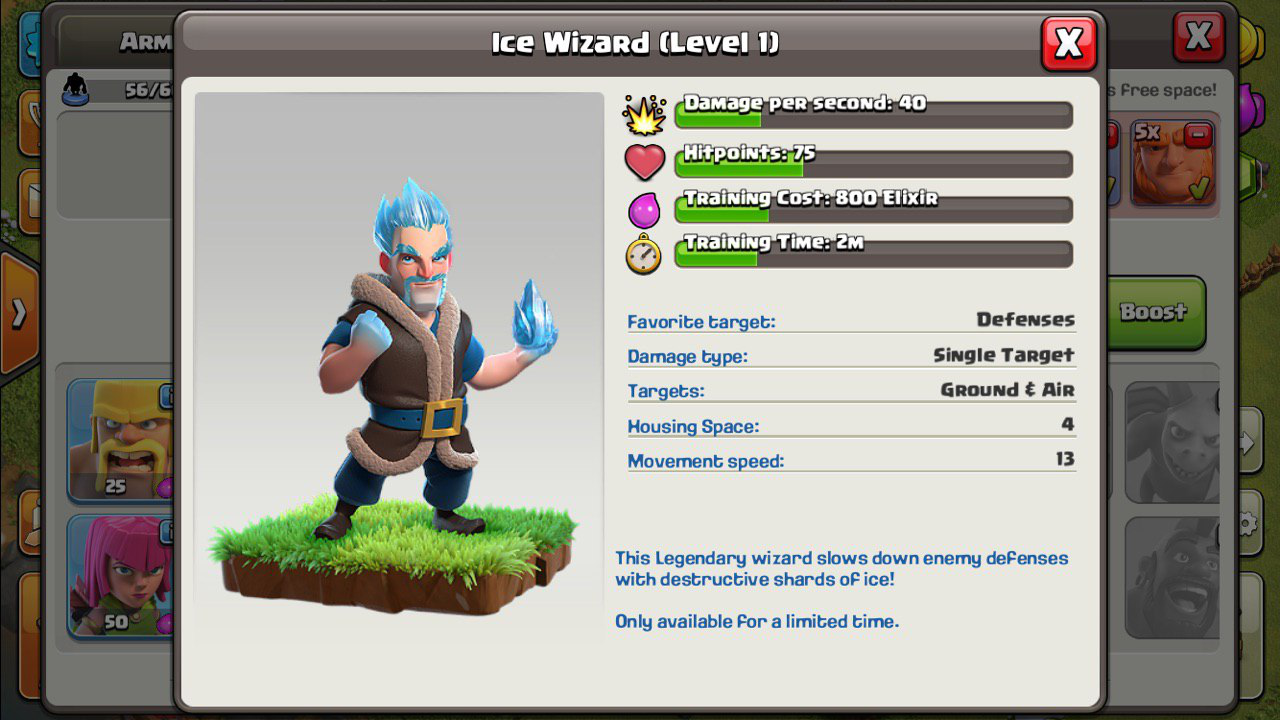 Clash of Clans has long passed the test of time, forming a loyal target audience within the project (as all the titles discussed in this article). In such cases, it is enough to maintain the quality of produced events. There is no need to experiment with complex monetization schemes to achieve a high impact of the event on key game metrics.

From what is interesting to me I can highlight the introduction of unique units that can be obtained only during the event under certain conditions. Here we can see the direct impact on conversion, as the desire of users to accumulate the maximum amount of unique content significantly increases the probability of conversion during the event. 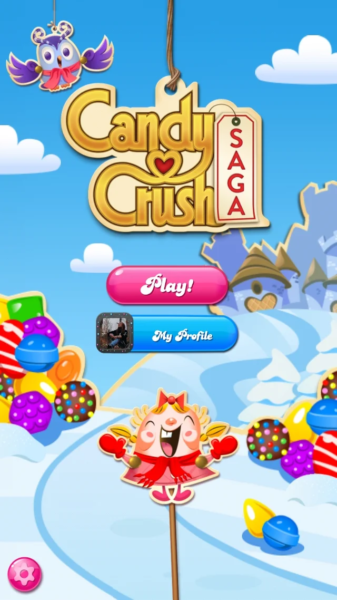 The game that drives the whole match-3 market, in a recent study of brand recognition from the Interpret agency was ranked second largest by the number of American fans – right after Super Mario. Candy Crush brand surpassed even Tomb Raider, GTA and Zelda. And the sequel of the game, called Candy Crush Soda Saga, managed to bring to the developer King the amount of more than 2 billion dollars.

For such – let’s face it – a legendary product, the success of which the producers of casual mobile games are trying to copy, the introduction of special Christmas event, holiday currencies, additional mechanics to increase earnings is not so important. The update includes winter menu design and redrawing of familiar game elements — and that’s basically it.

In Candy Crush there is a special gameplay feature: all levels relate to certain chapters, and as the player completes them, the player still gets to the holiday chapters – but, as users play at their own pace, not the fact that the user will open the Christmas chapter in the winter season. Monetization during the holidays does not change: the player is offered to buy boosters, gold, life to pass the levels. Promotional updates include Christmas posts on social networking sites.

Our main product is Magic Jigsaw Puzzles. The product has more than 50 million installations and brings the company a significant part of income.

Since the main audience of the application is in the West, we couldn’t get past Christmas and created the right mechanics for our format from scratch. When you enter the application, the player is notified about the beginning of the “Winter Story”, the main point of which is to collect holiday currency and use it to push the sled towards Santa and collect prizes.

For each completed puzzle is given a fixed number of lollipops, which depends on the selected level of complexity. Monetization is built around nudging players to progress: in addition to the standard purchase of puzzle sets, we have added deer purchase to increase the speed at which the sled is promoted. The promotion of the Christmas event is done through social networks.

The classic scheme did not bypass Magic Jigsaw Puzzles. The event should motivate users to collect more puzzles inside a time-limited event to receive an award. This event should have a good impact on both old and new players by offering them unique awards. Due to the fact that the main part of the product’s revenue is ad monetization, the increase in the number of puzzles collected will certainly lead to an increase in the length and frequency of sessions, and hence the number of advertisements shown. Simple and effective.

The implemented event was aimed at increasing the players’ activity during the Christmas season. Traditionally at this time we have seen an increase in the activity of our users, and by offering them a new event we have further increased their activity because of the desire to receive gifts. We’ve added a separate progress acceleration purchase that worked well and, as a kind of Battle Pass, we’ve also added unique prizes for our subscribers only, encouraging players to get a VIP account in the game.