Home › Blog › Genres and mechanics in mobile games: the problem of categorization 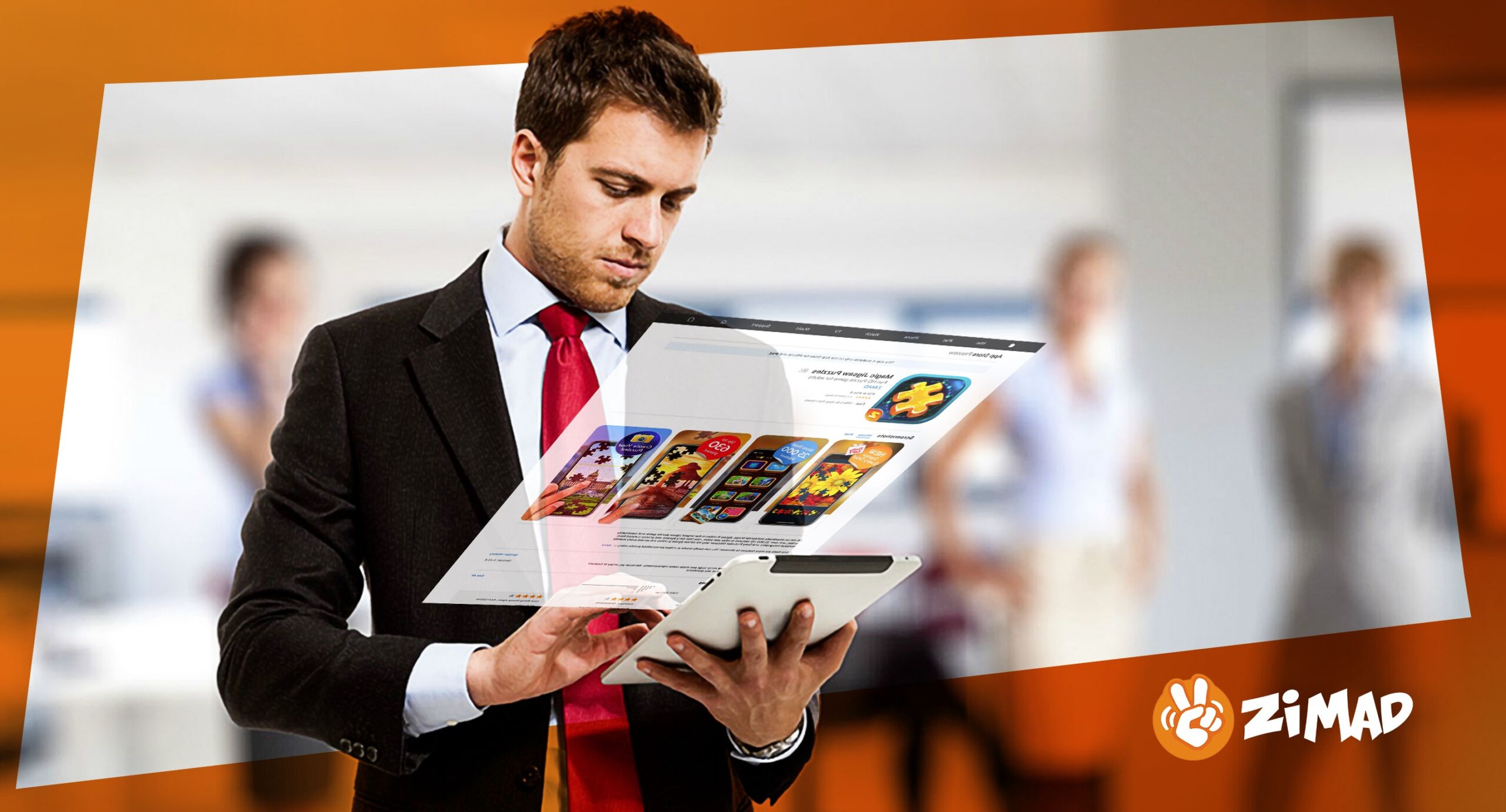 Genres and mechanics in mobile games: the problem of categorization

Modern games contain a lot of mechanics, and often, when the user wants to play a game of a particular genre, it takes a long time for him to choose a game that meets many additional criteria. Here we try to figure out how to solve this problem by modifying the game genre categorization.

Genres help categorize games by basic attributes and mechanics by assembling them into easy-to-understand categories.

All existing mobile games can be divided into two large categories: casual and core. Casual is a niche for everyday light gaming with short sessions and (almost) no experience threshold for success, while core, or hardcore, requires deeper involvement and much more time, which affects download statistics.

According to App Annie, in 2019 82% of downloaded games from application stores were casual (with heavily-dominated arcade and puzzle), and only 18% were core. 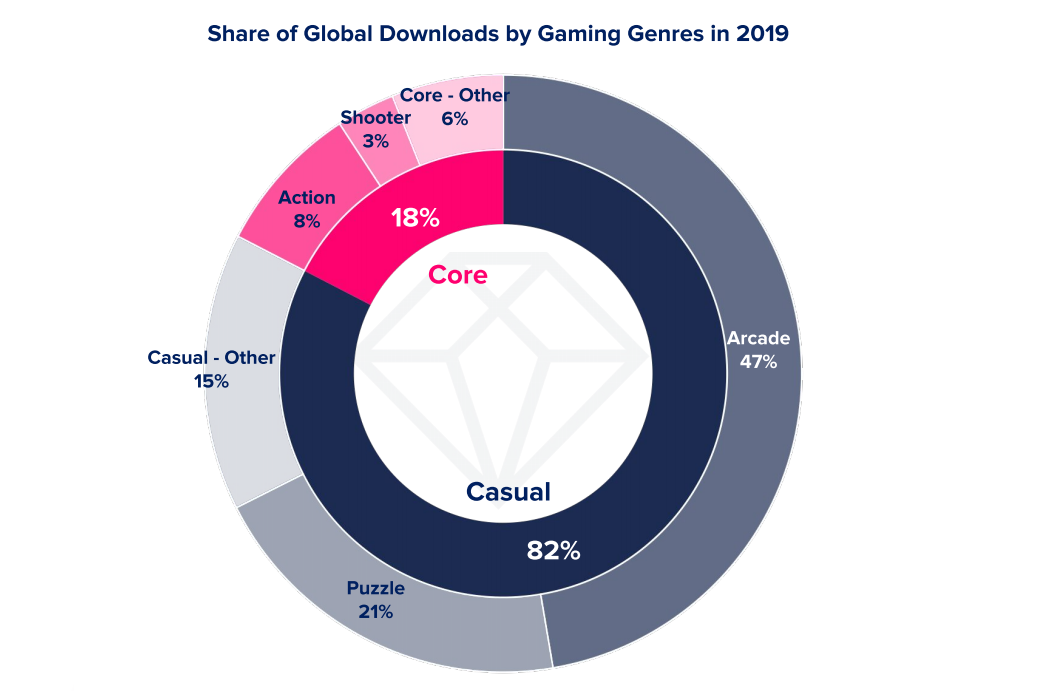 At the same time, the categorization of games on the stores themselves does not always correspond to the way the games are distributed in App Annie statistics. So, in App Store there are no separate “casual” and “core” macro categories , and casual is a separate category on an equal level with arcades, indie, puzzles, music, action and other categories.

In addition to the two main categories of games, some distinguish the so-called midcore games. For example, the Deconstruction of Fun published an article in early 2018 about the dominance of midcore games in the top ranks – according to their criteria, in 2017, only four of the 15 most downloaded games were not midcore.

In their opinion, midcore is “lighter, more accessible take on a hardcore theme or a genre. The portion of male players in these games is typically from 60% to 75%

Hardcore games are usually but not exclusively, targeted toward a predominantly male audience with men contributing up to 90% of the player base. These are large games with huge amounts of complexity and depth such as those found on PC’s or home consoles.”

Categorization of midcorn games also differs from author to author – so, Deconstruction of Fun calls midcorn any type of game with average complexity for the player. Also, for example, in this material here the author says midcorn games include such genres as Battler, RPG and strategy only.

Differences within the same genre

Categorization is not enough to describe the gameplay. By taking any two games in the same category you can find both similarities and differences – and for some products the difference is so great that it’s hard to believe that these games coexist in one category. For example, if you open the genre of “Racing”, the top three looks like this: 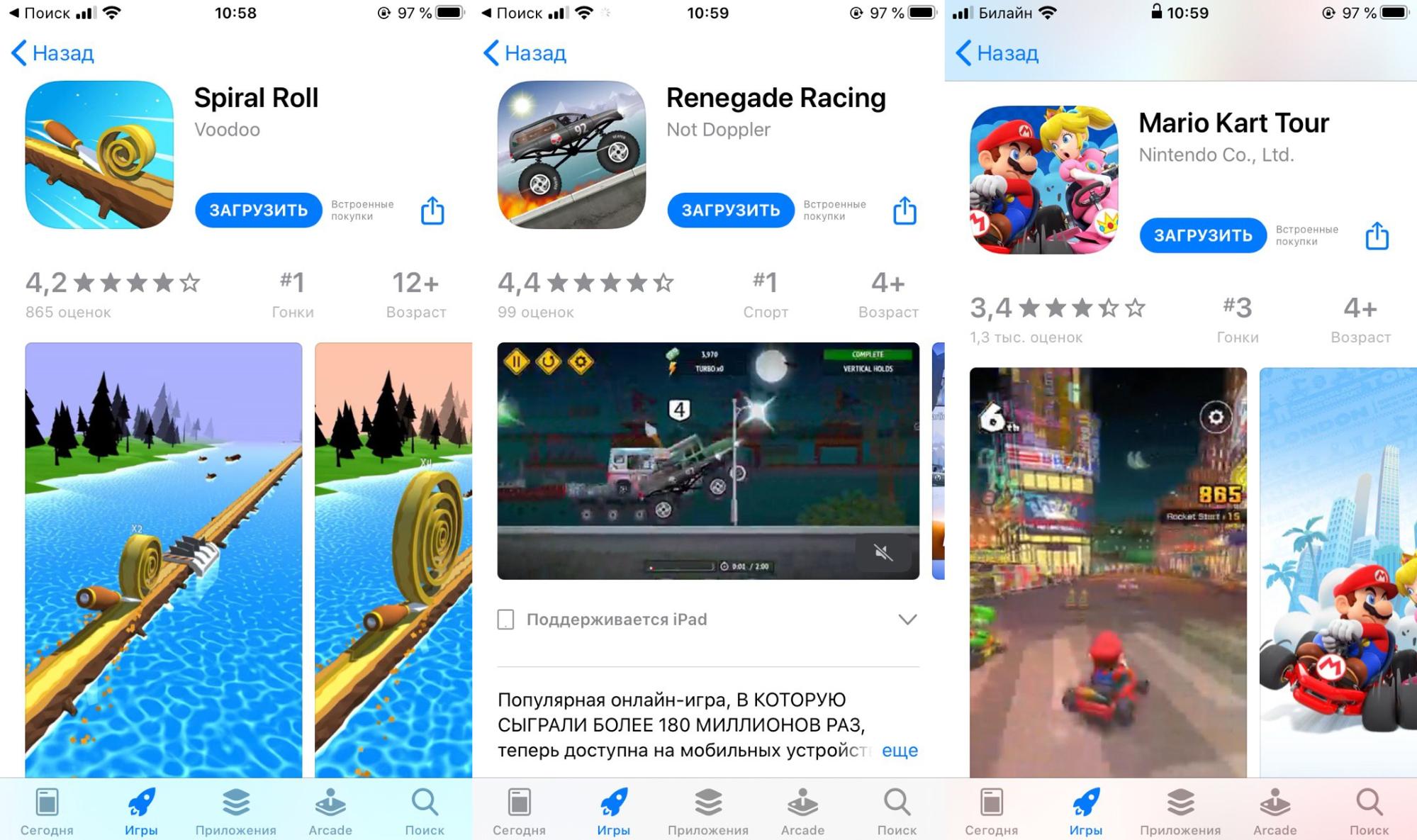 Top 3 games in the genre of “Race”. At the same time Renegade Racing, although it stands in the top of the genre, is included also in the “Sports” category.

To help in this situation come numerous screenshots and videos, for which a separate part of the page in the store is highlighted. Through them, the user can understand exactly what will be expected from him in the game. 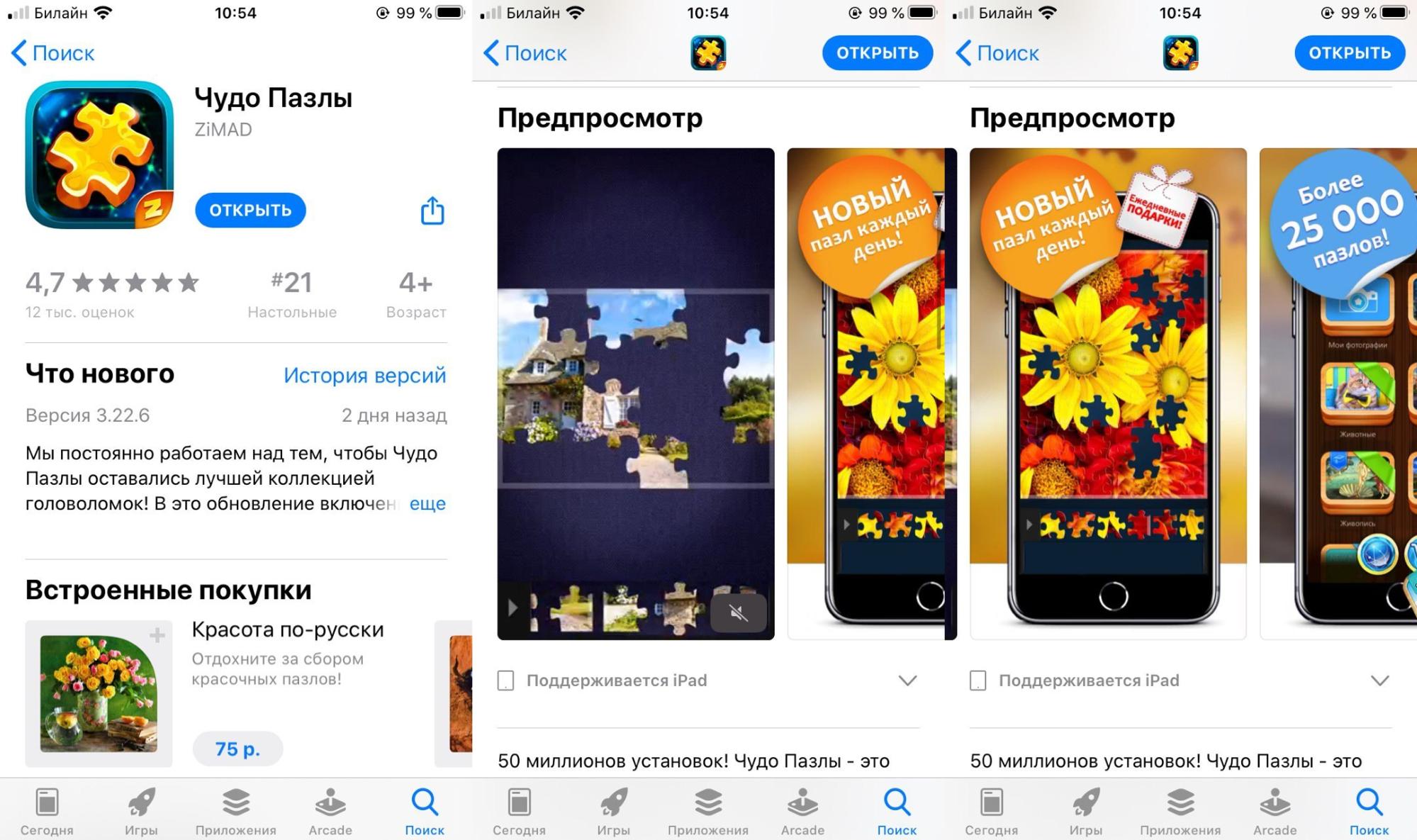 Our product Magic Jigsaw Puzzles is a sample casual game with a detailed app store preview.

Alternatives to the standard categories

Determination of core and meta characteristics

Given all the factors mentioned earlier, the standard division of games presented in app stores is not always sufficient. For more accurate categorization of games can be used, for example, three-level categorization.

GameRefinery wrote about this way of categorizing games: they divide each game into several parts, core and meta, where core is the basic mechanics of the game, shows what’s going on in the game, and the second one – meta – shows what the progress of the game looks like, refers to the “preparatory” stage, i.e. all kinds of upgrades.

GameRefinery table of core and meta

But according to GameRefinery, this system isn’t always enough either. As an example, they show Game of War and Clash of Clans: both games have their core characteristics as strategic fighting games, and their meta is described as “building hostile bases”. But for everyone who’s played these games for more than five minutes, it’s clear that they are still very different, and here to help comes the category of definition of fundamental mechanics.

This is the category that helps to distinguish one game from another in the most detailed way possible. For example, the basic mechanics of Game of War – 4x strategy.

GameRefinery wrote that it used about 15 mechanics in the categorization process, ranging from visual novels and 1on1 brawler to MOWA and MMO.

Such detailed categorization helps to analyze the market and see which meta characteristics in the genre are more likely to be successful and which are not very popular.

Kirill Razumovsky used a similar categorization system in his article “Which game mechanics make it to the top” on Gamasutra, only he replaced the names of core and meta with primary and additional. With the help of the collected osprey of data on available mechanics he created a table showing the probability that there will be a certain meta, or additional, mechanics in a certain genre. 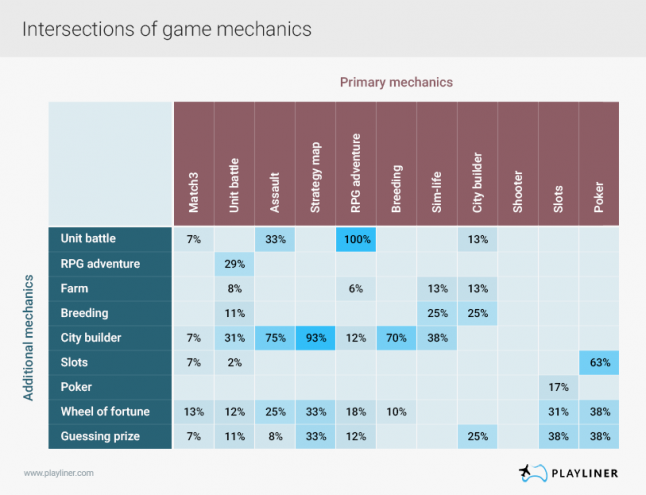 * The existing categories in app stores do not help much to understand the essence of the presented game. The visual content comes to rescue.
* Existing categorization requires modifications to help users find the games they are interested in.
* The introduction of general categorization tools would help not only users, but also analysts by giving them the opportunity to predict the popularity of games based on their characteristics and to study changes in the marketplace.
* Games that require more detailed and lengthy study have a much smaller audience than meta games; at the same time, their audience is more loyal, solvent and spends more time playing the game.
* Meta games are many times bigger than core. But their life cycle is short, and that’s why the chance to guess with the right mechanics and release a hit is not as low as core.